There are many ways to transfer screenshots from iPhone and iPad to Mac. You can use built-in app like Messages, third-party app like Instashare and Dropbox, or the classic email client. But what I’m looking for is more than just transferring those screenshots.

First, I need a seamless way to transfer screenshots from iPhone and iPad to Mac. This one can be easily solved by using Dropbox’s Camera Upload.

Now the second part: differentiating screenshots from the rest of photos. If you don’t differentiate them, Hazel will move all the photos in Camera Upload folder to your screenshots destination folder.

In the screenshot above I use any as the matching rules. One of the less known tips when defining conditions is that you can create nested rules by pressing the + button while holding Option. This allows you to come up with several matching conditions in one rule instead of creating many Hazel rules.

I’ve also renamed all the imported screenshots to follow the same naming pattern as the screenshots taken on Mac.

All of my screenshots are in JPG format because they’re smaller than PNG in term of file size. You can even compress the size further — usually up to 50% — with ImageOptim. I’m not saying JPG is better than PNG, but for screenshots that don’t need transparency, JPG is more suitable.

There are several ways to complete this task too. You can use Hazel to detect all PNG images inside Screenshots folder, run an imagemagick to convert, crop or compress all of them at once.

Or you can create a folder action in Automator to avoid scripting. The end result will be something similar to the screenshot below. 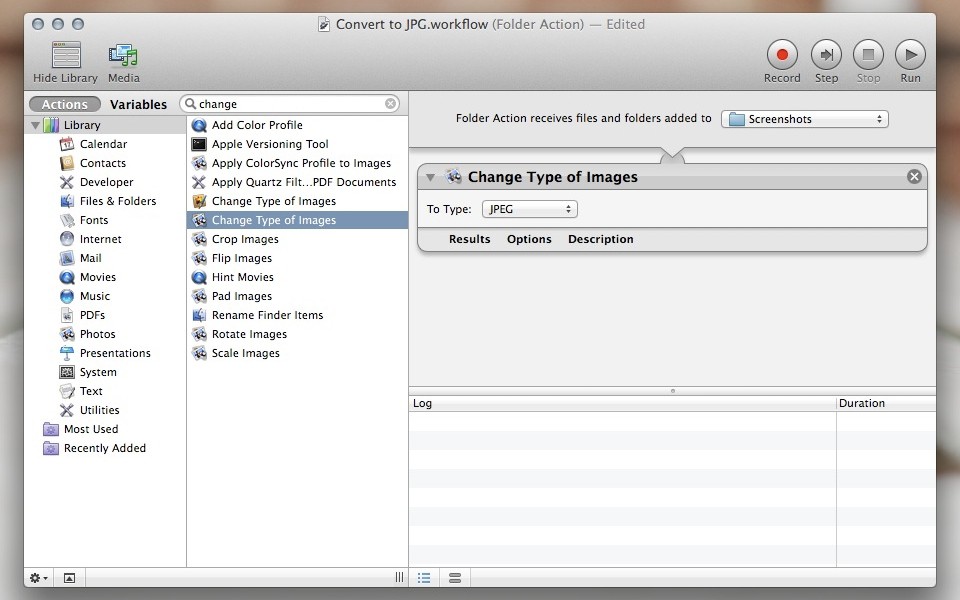 Run Automator and create a new Folder Action. If this is the first time you use Automator, don’t worry, it’s not as complicated as you think. Folder Action basically means we attach a workflow to the folder that will run whenever there is a new files found in the associated folder.

The left sidebar contains the list of available actions, while the right side is your workflow panel.

Select a folder to receive action, and drag Change Type of Images action into the right side of working dashboard. Select JPEG as your preferred format. Press Command+S to save.

Test the folder action by moving one of the PNG images into the associated folder. The PNG images should convert to JPG automatically. You can even use this folder to batch convert photos.

Now take some screenshots on your iPhone or iPad, run the Dropbox for iOS, watch how Hazel and Automator move your screenshots and convert them automatically.

The wonder of this workflow is everything has been taken care by the system. You just take some screenshots and run Dropbox.

Are you wondering how to be notified when the screenshots are transferred completely? Consider create a beautiful stack icons that’ll show you the latest screenshots directly from Dock. It won’t disappoint you.

How to Find Conflicting Keyboard Shortcuts on Mac
Here's how you can detect and find conflicting keyboard shortcuts on Mac.
How to Set Up macOS for Web Development
Learn the best practices to set up and configure macOS for web development.
Remapping Hyper Key in macOS Sierra
Karabiner has stopped working on macOS Sierra. I spent a couple of weeks searching for a solution and found Karabiner Elements that perfectly restores the `Hyper` Key back to macOS Sierra.
How to Use Hazel to Save Bills to Evernote Automatically
Why are you still saving invoices and receipts to Evernote manually if you can archive them automatically with Hazel?