Working in small screen means you often need to switch between apps, or move and resize windows to optimize the screen state. Sometimes you’re comparing two designs side by side, sometimes you’re taking notes while watching screencast, or sometimes you simply want to move documents from one folder to another.

In one of the Matt Gemmell’s article, small screen productivity, he shared all the best practices to work on his 11” MacBook Air. One of the tips is using a dedicated utility for resizing and managing windows.

Moving and resizing windows is traditionally the job of a pointing device, and it’s a guaranteed route to headaches – particularly if you’re a bit obsessive about things lining up properly, as I am.

There are lots of utilities for this task. There is no “best” utility, but only the one that caters your needs. In this post, I’m going to share how I use BetterTouchTool to manage windows.

BetterTouchTool isn’t primarily designed to manage windows — its main feature is to boost the functionality of Trackpad and Magic Mouse by using gestures as a shortcut to trigger an action.1

Turn on window snapping feature in the Action Settings panel. You can configure the appearance of preview window, the size of snapped window, and the padding between windows. For the best performance and appearance, I recommend the configuration below. 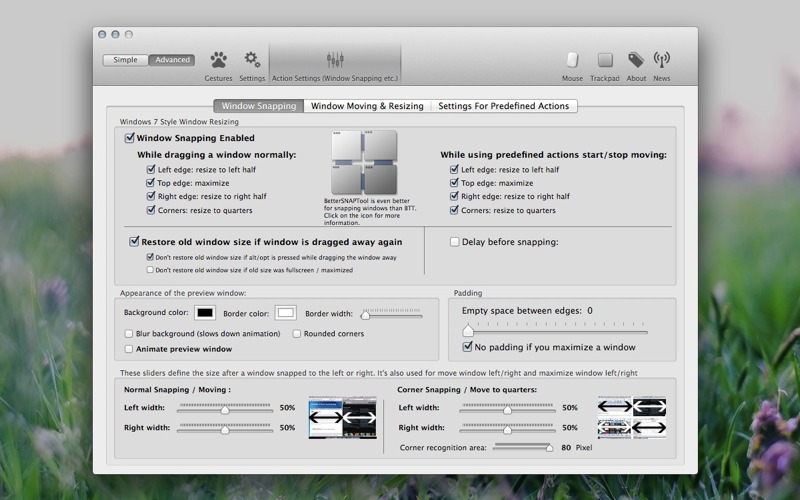 You can also resize and move windows with custom shortcuts. The preferences to customize shortcuts can be found under Keyboard section.

Shortcuts are useful when you work in small screen. If you want to compare a folder contents side by side, you can press Command-Shift-Left Arrow (←) and have the first window to fill the left half of the screen, and press Command-Shift-Right Arrow (→) to have the second window fill the right half of the screen. This is much faster than dragging the window to one of the edge.

Don’t be intimidated by the Command-Shift-Option-Control key combination. It’s known as Hyper key mapped to the Caps Lock, so I only need to press Caps Lock-Right Arrow (→) to trigger the actions above. You can find out more about mapping Caps Lock key in this tutorial by Brett Terpstra.

You should notice that there is an action for F3 that centers window. If you’re like me, you probably want make sure the window perfectly centered all the time. Well, that’s exactly what this shortcut do: perfectly center the active window.

How to Find Conflicting Keyboard Shortcuts on Mac
Here's how you can detect and find conflicting keyboard shortcuts on Mac.
How to Set Up macOS for Web Development
Learn the best practices to set up and configure macOS for web development.
Speed Up Mission Control in macOS Sierra
The new Mission Control animation on macOS Sierra is slow. Here’s a way to speed up the animation and make it looks faster.
Remapping Hyper Key in macOS Sierra
Karabiner has stopped working on macOS Sierra. I spent a couple of weeks searching for a solution and found Karabiner Elements that perfectly restores the `Hyper` Key back to macOS Sierra.