Snappy is my most used screenshot app on macOS. It’s also free. I still recommend it if you’re looking for a free screenshot and annotation tool for macOS. But I decided to replace Snappy with CleanShot X this year.

I’ve been using Snappy for the past six years. I’ve never considered searching for a replacement because it has all the features I want from a screenshot app. Until recently, it becomes slow when you have too many snaps in the library. I have to regularly delete old snaps to make sure the menu bar item is responsive.

CleanShot X is the best and most responsive screenshot app on macOS right now. It has most of the things I want from Snappy. Here is a list of what like from CleanShot X:

CleanShot is not perfect for me yet. There are some areas that I wish they could have done better.

CleanShot X hasn’t added a local library to track screenshots history. I hope that they will consider adding this feature to their cloud library. It will be great if they can automatically tag the screenshot with the front window application name. 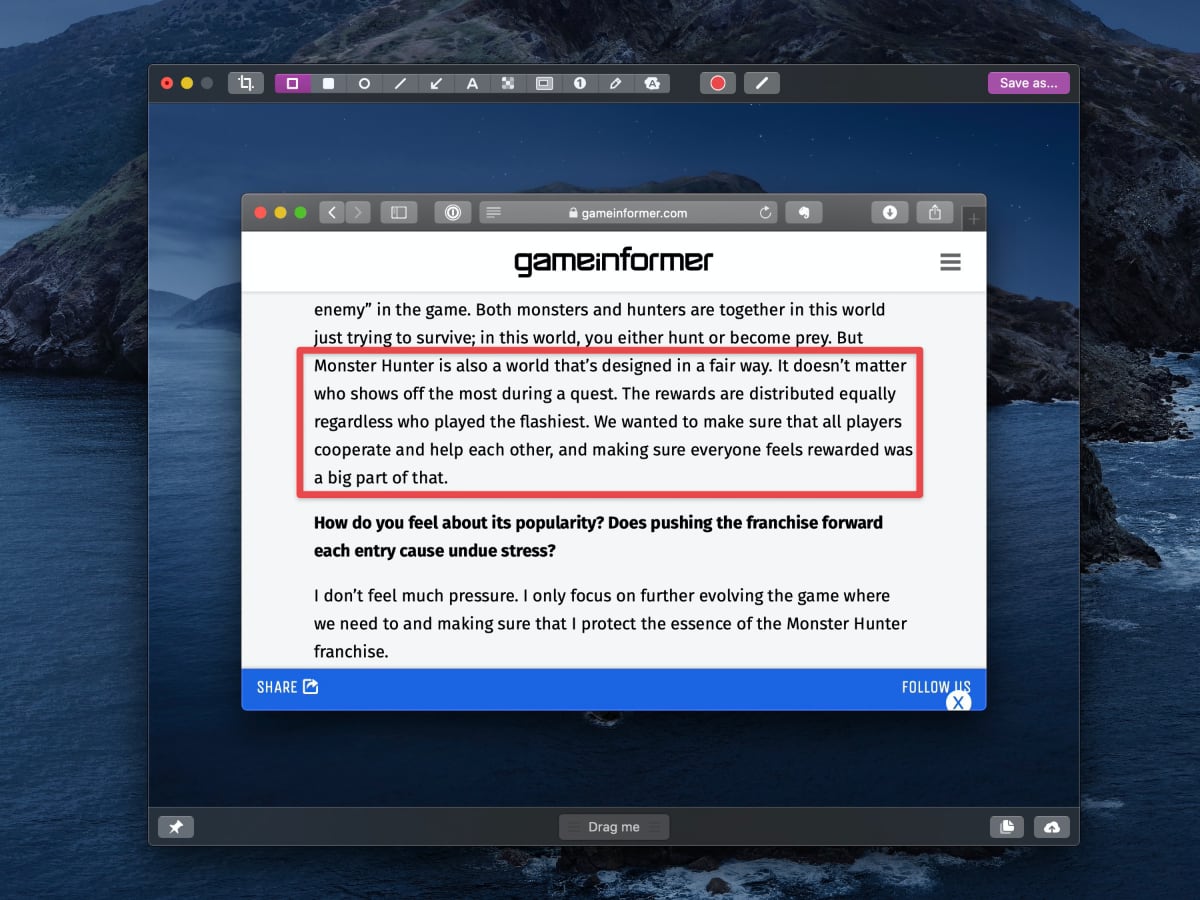 CleanShot X does a great job with “Capture Area & Annotate” feature. There are a ton of options for you to choose from. The annotation tool appears after you’ve captured the screenshot. Once you’ve finished annotating the screenshot, you can have few options:

I wish they can do the same for “Capture Area and Pin”. Wouldn’t it be better if you can also use these shortcuts above for pinned screenshots? They can also add Command - E as the shortcut to display annotation tool.1

CleanShot X has done a great job with their Wallpaper preferences. One way to make a screenshot looks fabulous is to include the wallpaper as the background with some padding around it.

This is also true with the screen recording.

I don’t expect them to add this feature to screen recording (yet). What I usually do with other recording tools is to press Space to focus the screen recording area and resize the window while holding Option. Here is the native macOS window resizing behavior:

It seems that CleanShot X is not using native window resizing. I can’t use these shortcuts with CleanShot X screen recording feature. You can’t also maintain the window at the center by changing the recording area value because it’ll expand to the right.

CleanShot X costs $29 per Mac. I’m not a fan of buying software licenses that you can only use on one machine, but I understand that it’s the only way to prevent people from abusing their privilege by sharing their licenses with other people.

The other option is to subscribe to Setapp at $9.99 per month to use CleanShot X and also gain access to additional 150 apps. If you’re not sure whether it’s worth it, you can read my review of Setapp here.

How to Find Conflicting Keyboard Shortcuts on Mac
Here's how you can detect and find conflicting keyboard shortcuts on Mac.
Is Setapp Worth It?
At $9.99 per month, I will show you how to decide whether subscribing to Setapp is worth the money.
Getting to Know CleanMyMac
I’ve been using CleanMyMac since 2012. It completes macOS by offering various tools to maintain and review the system status easily from the dashboard.
Hocus Focus
Hocus Focus increases your productivity by hiding away windows you’re not using after a certain period.