My favorite productivity tool, Alfred, has entered its second version and released the beta for every Mega Supporters last night. The most useful feature in Alfred 2 is workflow that allows you to create a series of actions to complete a task.

The extensions support in the first version of Alfred were great but limited in term of creation. However, with the new workflow, everything are more powerful and easier to manage. 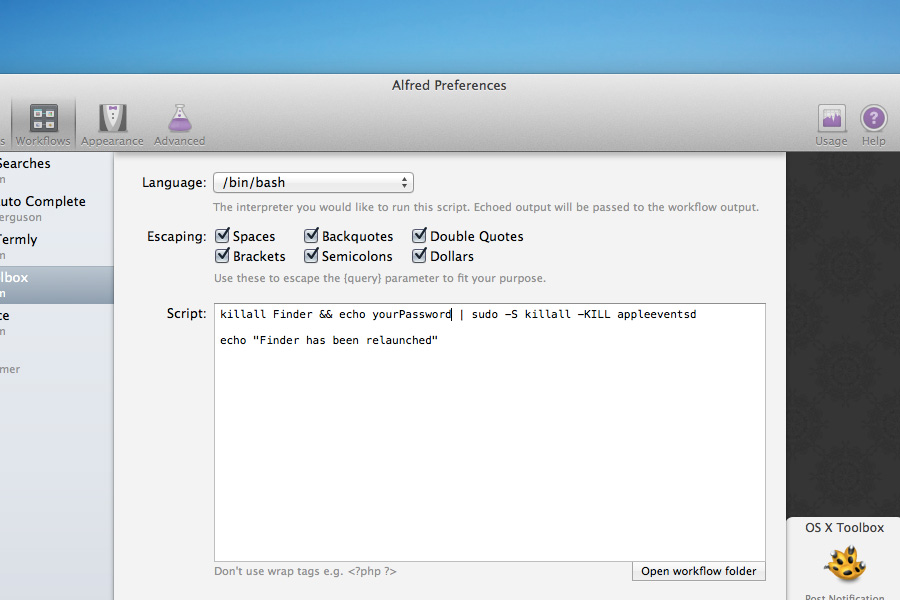 Taking this chance, I’ve compiled all the extensions I’ve built and downloaded before into single workflow called “OS X Toolbox”. It’s a one stop toolkit to fix common annoyances and toggle states in OS X.

Attribution to each original extension creator can be found in the shell script action.

The extensions are all packaged into one workflow so it won’t clutter your Alfred preferences, and the actual process is pleasant, even for beginner.

I simply want to show you how easy it is to create your own workflow in Alfred 2. If you haven’t upgraded to Mega Supporter license, don’t hesitate and hurry get the license.

Update 2013-08-15 I’ve included the command to reset Launchpad’s apps ordering in the latest update. You may get the workflow from the download link below.

Update 2013-09-27 Ed Heltzer from Rainy Day Media has sent me an updated workflow with more and better tools. With the improved Wi-Fi toggle, you can also view the your Wi-Fi network and see your IP address from single command. Perhaps the “space” command is the one I’ll use the most. It’ll check and show the storage on your local and mounted drives. Pretty handy, isn’t it?

Update 2014-10-18 Changed the icon to match OS X Yosemite flat looks. There is also a fix for the Launchpad action in this update.

Reading CSV as JSON with Alfred Script Filter
Learn how to use CSV as the source data in Alfred through Script Filter input.
Better "Quit All" with Keyboard Maestro
Combine Alfred and Keyboard Maestro to create a shortcut that quits all applications and choose which apps to keep active in the Dock.
Non-Conflicting Shortcuts
How often you have to reassign a global shortcut because it interferes with the built-in shortcuts? How to install more macros and workflows without adding complexity to your setup?
Trigger Keyboard Maestro Macros with Alfred
Key Clue is an workflow that lets you run menu bar item and Keyboard Maestro macros from Alfred for Mac.