CloudApp and Droplr are without doubt well known file sharing services. They separate themselves from many competitors in this industry by delivering a high standard of web interface, providing native apps that run seamlessly on Mac OS X.

For those of you who may not be familiar with how they work, CloudApp and Droplr allow you to upload your files to their server by either:

If I were to use only one app, I’ll choose Droplr. Take aside a shorter URL generated (d.pr to cl.ly), Droplr also supports Markdown and text upload where you can display your text like normal webpage easily.

Droplr and CloudApp were the only candidates when I decided to use file sharing service last year. It took me a while to pick one of them. In the end, I opted to Droplr because CloudApp only allowed 10 uploads each day.

Droplr launched their second version few weeks ago with a major update both in web app and native app. Despite the changes, it doesn’t change the way I use it. In fact, I like most of the updates.

Web App is blazing fast. Even with a slow connection, Droplr manages to load much like a native app, it doesn’t take more than 2 seconds to switch between pages. I use web app whenever I want to check the statistic of clicks. 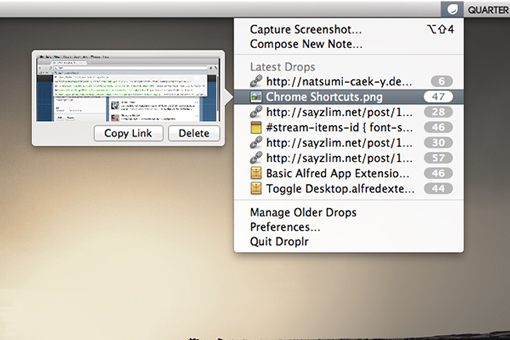 Native App, more useful with preview. Droplr 2.0 app has a feature to preview image directly from menu bar. It’s pretty handy if you upload a lot of images. You can also delete your recent drops without having to access the web app. CloudApp is one step late implementing this feature, but I’m sure they’ll include this feature in the near future.

Droplr comes with a 25 MB upload size limit and a space of 1.24 GB. You can use your own custom domain by upgrading your account to paid account.

Droplr is more like a personal storage where I store links and files for my own blog. It also serves as an analytic for me to track number of clicks and downloads. If you share a lot and want to separate personal files from random links, images, and documents. I think you’ll like Droplr.

If Droplr is my small drawar, then CloudApp is my huge storage room. I’ll toss everything into this room without bothering the number of downloads.

Apps Integration. The popularity of CloudApp manages to get a lot of popular apps to include CloudApp as one of the upload options. Take Sparrow integration for example, you can upload files to CloudApp, which return shorten links on success, by dragging the files into “New Message Window”. Another app I use daily is Twitterrific where I usually shorten URLs and attach pictures. 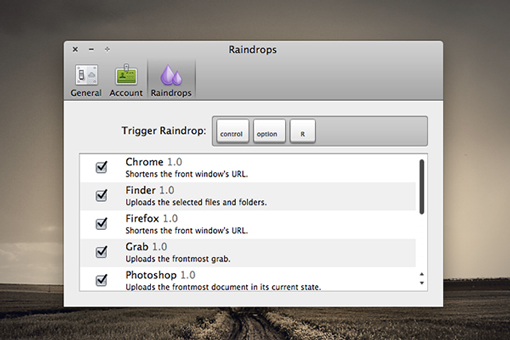 Raindrops are plugins where you can trigger to activate certain behaviour in one of the supported active apps. If you trigger Raindrops while using Chrome, CloudApp will shorten the current active URL.

Just in case you didn’t notice, CloudApp has 10 files upload limit a day. Although it seems too little, for me, it’s more than just enough.

There is no storage limit mentioned in CloudApp blog. I assume files stay forever.

If you’re not bothered with having too many accounts, just try to use both services. If you only want pick one, CloudApp is more useful in term of apps integration. In term of features, you should pick Droplr.

Dropbox as Online Backup
Build a versatile online backup plan with Dropbox on your Mac.
Highlight
How to Keep Your Mac Desktop Clean
A clean desktop is your daily clean canvas before you put down the most important thing you need to work on.
Reason to Hide Away Inactive Apps
It’s more than just keeping the desktop clean — you need to know the real reason to hide those inactive apps.