I keep Evernote idle most of the time. Most of the notes in my Evernote account are automatically created when I highlight a passage of text in Instapaper, save an article from Safari, or send an except inside iBooks. I don’t have to open Evernote unless I need to search for notes as references. 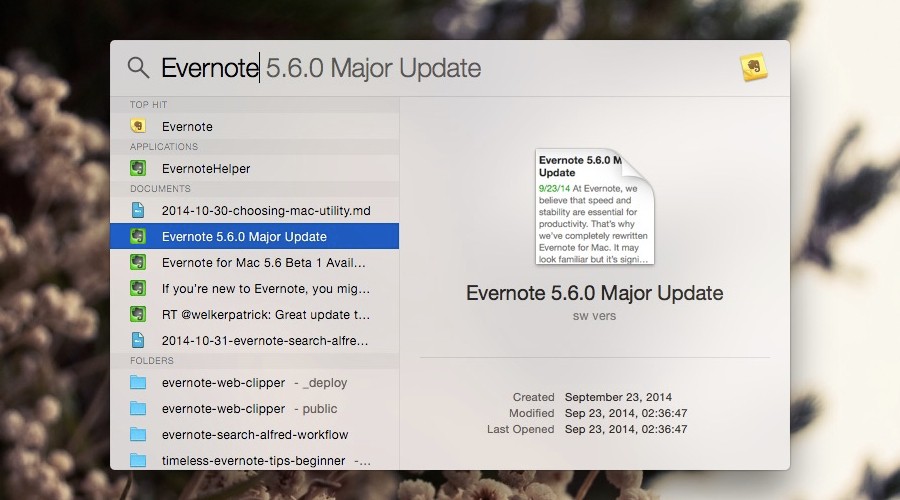 When I was trying Spotlight after OS X Yosemite release, I noticed that Evernote’s notes show up in the search result although Evernote is inactive. Apparently, Evernote creates a list of documents which can be indexed by Spotlight known as Evernote Note Metadata. By default, Alfred doesn’t include Evernote Metadata as identified documents so you won’t be able to search it from Alfred. You can easily add it in the search result by dragging com.evernote.Evernote folder into Alfred Search Scope. You can find that folder in this path:

Now you can use the find and open keywords to search for the Evernote notes with Alfred.

There is one small problem with this setup though. If you open the notes from Alfred, the revealed notes will automatically activate the search panel and mess up the window. The solution for this problem is telling Alfred to open the notes with Finder which you can do by creating a custom search for Evernote’s notes.

The preview above shows the custom workflow I’ve created to search for the notes stored in Evernote folder. It’s a straightforward workflow which you can build quickly in Alfred without having to write your own scripts. If you’re like me who only need a simple workflow to quickly search for notes in Evernote, you’re definitely going to love this workflow.

Evernote Device Limit Workaround
Find out how you can turn the Evernote website into an application to work around the device limit.
How to Use Hazel to Save Bills to Evernote Automatically
Why are you still saving invoices and receipts to Evernote manually if you can archive them automatically with Hazel?
Evernote Workflows
Evernote is essential in my workflow, and with workflows I can customize how I want the note created easily from Safari and iBooks.
Inside Evernote Histories Notebook
Keeping a Histories Notebook that records your online activities proves to be a great asset in my workflow.