As an Twitter active user, I noticed a slight difference in usage pattern between using Twitter on desktop and mobile.

Checking out Twitter on mobile is most likely done when you’re waiting for bus, bored with a conversation, or when you’re getting ready to sleep. Most of time, you’re not doing important tasks. So, checking out timeline is one form of entertainment.

This is a whole different story when you’re checking out Twitter on your desktop. Most likely, you’re working. The timeline become a hindrance instead of entertainment.

Wren for Mac is an app crafted by Andrew Ramos and Kevin Smith with one purpose. It’s an app to help people working on Mac to focus, clearing all Twitter distraction.

Wren for Mac uses a beautiful designed yellow feather icon to show that it’s a Twitter client. At the same time, the feather can also mean quill used for writing, representing itself as a writing tool for Twitter.

Contradicting to color choice in most Twitter client, Wren for Mac uses warm yellow color in the app. The overall feel makes you want to write when you launch the app. The notebook metaphor matches the OS X interface without showing a sign of forced realism. 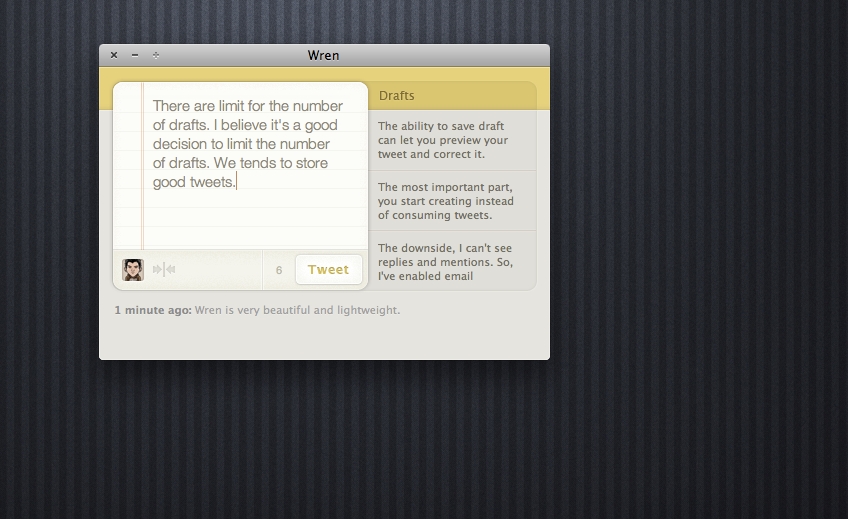 Wren’s window is fixed, thus you won’t be able to resize it. The small window displays these three informations:

The tweet box has 140 letters limit without compromise. You’ll be able to shorten the url by clicking the shortening button there or by using shortcut. The drafts are displayed non-obtrusively on the right side. You can also see your previous tweet with timestamp included in a well balanced manner.

The whole layout works together to assist you in crafting quality tweets. Last tweet helps to keep track of your last tweet and relevancy, while the drafts can preview your tweets before published.

Wren has stripped all unnecessary shortcuts and commands in menu bar. As the result, figuring out and mastering all the available shortcuts doesn’t take much time.

Surprisingly, Wren’s preferences is so simple with almost nothing for you to configure. First, you can configure global shortcut to access Wren. In this case, I use option+w for it. Second, you can choose which URL shortening services you want to use. I think it’s one of the app with the most choices including bit.ly, CloudApp, goo.gl, is.gd, j.mp, and TinyURL.

However, it seems that CloudApp doesn’t work on Wren at the present.

To solve these problems, I turn on notifications for replies and DM. I can do it since the number of replies and mentions are still relatively low.

I believe Wren for Mac is an app that doesn’t require much polishing and update anymore because it’s perfect already.

Wren for Mac is for you who want to occasionally tweet without having to check out timeline. If you love to pour your thought and don’t want to be distracted, then you should get this app.

Remember that Wren for Mac is not crafted to work as full featured client. Instead, it’s an app with one purpose. Let you share your thought and keep creating.

Better Way to Set Default Application on macOS
Learn how you can set and manage the default application on macOS with OpenIn.
Replacing DragonDrop with Dropover
Dropover is one of my must-have macOS apps to boost my productivity by acting as a holding bin for me to move files around.
How to Find Conflicting Keyboard Shortcuts on Mac
Here's how you can detect and find conflicting keyboard shortcuts on Mac.
Why I Switched from Snappy to CleanShot X
CleanShot X is the best screenshot app for macOS right now. Find out why I switched over from Snappy to CleanShot X in this post.